With a global reputation for its music and 129 years of history, it’s no surprise that the College and its people have been written about on many occasions. Here is a list of some of the volumes produced, followed by contributed reviews of others. 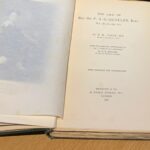 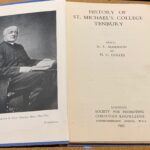 Ouseley’s Legacy – John Austin 2014.
Ouseley’s Legacy is about John Keble and the Oxford Movement of 1840 and the Catholic Revival. It is also about Pugin and the Gothic Revival. The Lives of Sir Frederick Arthur Gore Ouseley, his father, Sir Gore, who was ambassador to Persia, and Henry Woodyer, the architect of St Michael’s Church and College, included. There are also details of the closure of the College and of the last service, The Service of Thanksgiving, on Sunday July 14th 1985 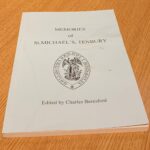 The name Sir Frederick Ouseley is probably best known today for his anthems FROM THE RISING OF THE SUN and O SAVIOR OF THE WORLD. The name St. Michael’s, Tenbury can often be found in the source listings of modern editions of Tudor works. Both deserve to be better known. Both are the subject of this profoundly interesting book which was published after the closing of St. Michael’s College in 1985.

A Brief Summary of Sir Frederick Ouseley’s Life. Frederick Arthur Gore Ouseley (1825-1889) was born into a family that had social standing, wealth, and privilege. It was almost unthinkable that an heir to a baronetcy would consider music a career; and yet that is the path Sir Frederick followed. Following completion of a BA degree from Oxford and ordination into the Church of England, Sir Frederick became assistant curate of St. Barnabas’ Church, Pimlico. There he began a lifelong pattern of seemingly boundless generosity in the cause of church music by presenting the church an organ and contributing towards the cost of the choir. Unfortunately, St. Barnabas became embroiled in controversy. The sensitive Ouseley was ill-equipped for such events and he left St. Barnabas, but not without providing for the care and training of the boy choristers of the disbanded choir school.

While away in Europe Ouseley began to consider just what he was going to do with the rest of his life and what was to be done with the boy choristers his associates were training. Through a series of letters Shaw traces the germination of the idea to build his own church and college to train the boy choristers to form a “model choir.” Upon his return to England, Ouseley bought land just outside of Tenbury and erected a parish church and college buildings. St. Michael’s College was consecrated 29 September 1856.

During his years as Warden of St. Michael’s College and Vicar of St. Michael’s Parish Church continued his lifelong accumulation of antiquarian music and books and thus amassed one of the most extraordinary collections of Reformation and Tudor music. Some of these works found their way into musical collections Ouseley edited. He also composed a large body of now mostly forgotten anthems and canticle settings, some of which were included in collections of contemporary works Ouseley edited. As Precentor of Hereford Cathedral and Professor of Music at Oxford Sir Frederick’s influence was far-reaching.

Dr. Shaw weaves together a fascinating history of Ouseley and his unique musical and religious foundation. Shaw’s book is not a cold recitation of facts, but a lively description of life at a small, rather remote choir school. Watkins Shaw, a musical historian and Handel scholar, also includes a perceptive analysis of the repertoire of the College choir.

The second half of the book is an account of how Ouseley’s successors tried to keep alive Sir Frederick’s foundation and remain true to the vision of its founder. The remoteness of St. Michael’s and the peculiar nature of Ouseley’s trust made this a monumental task. Although each succeeding generation of Wardens had their own take on the problem, but by and large the plans involved developing a thriving preparatory school around the choral foundation. Unfortunately, despite valiant attempts, St. Michael’s College was forced to close in 1985. However, it’s influence lives on in the human and musical legacy of its old boys. For example, Jonathan Harvey, the distinguished composer, and Christopher Robinson, St. John’s College – Cambridge, are old boys of the College.

I wholly commend this book to you. It is a fascinating and moving tale of the extraordinary lengths individuals will go in the cause of music and, in particular, church music. It chronicles the life and times of one England’s truly visionary church musicians and unique choral foundation he founded.

The book is available from the Ouseley Trust. There are about 140 copies left. Details follow.

Payment should be made in sterling money order made payable to ‘The Ouseley Trust’.